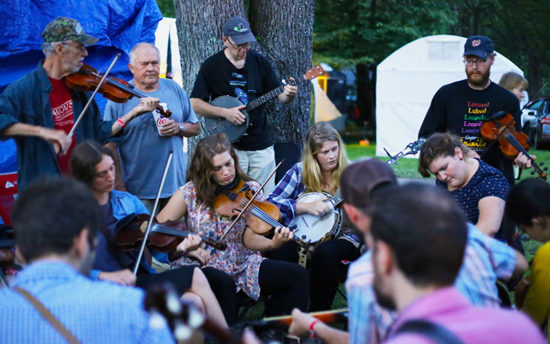 In the early days of European settlement in North America and the United States, the violin was the most commonly played musical instrument. The instrument is small and portable, so people easily carried it along as they migrated into the Appalachian Mountains and to the West. It is versatile enough to play classical art music as well as lively dance music. Fiddling remains one of the most vital folk music traditions throughout the United States. This article focuses on old-time fiddle tune traditions in Appalachia.

Fiddle tunes are primarily instrumental melodies, though some have words that can be sung optionally. Most originated as tunes for dancing, but people often play them today in social settings and performance that do not include dancing. Most fiddle tunes consist of two melodic parts, often referred to as the A and B part. Frequently the tunes are played in A A B B form, that is, playing the A part twice, then the B part twice. This form is repeated for as long as the musicians, or the dancers, care to continue.

What is the difference between a violin and a fiddle? According to The New Grove Dictionary of Music, a fiddle is "a generic term for any chordophone played with a bow." This includes a variety of exotic stringed instruments played throughout the world. In popular usage in the United States, the word "violin" is used to describe the instrument when it plays classical and art music, and the word "fiddle" is used to describe a violin (and sometimes other bowed stringed instruments, such as viola or cello) when it plays dance, folk, country, and bluegrass music.

There can also be differences in the way the instrument is physically adjusted (or set up) to play in one style or another, but it's essentially the same instrument. Violinists hold the instrument between the chin and shoulder. Many fiddle players hold it this way, but some hold the instrument against their chest, which makes it easier to sing while playing.

Fiddle Tunes from the British Isles

Most ethnic groups in the United States have fiddle traditions. The majority of people who settled in the American colonies were from the British Isles. Immigrants from the British Isles played a stock of dance tunes and other melodies from England, Ireland, and Scotland. These tunes persisted in North America, and they became the basis for variations and new tunes that emerged in the United States. Irish and Scottish tunes and playing styles became the dominant influence on Southern American fiddle tunes.

During the 1700s, more than 200,000 people emigrated from the Irish province of Ulster to the British colonies in the New World. The origins of the Scots-Irish, as they are called, lie primarily in the Lowlands of Scotland and in northern England. They had been relocated to Ireland's northern province of Ulster starting in 1606, primarily to strengthen royal control over the North of Ireland. Most of the Scots-Irish emigrants settled initially in Pennsylvania. From there, many followed the Great Wagon Road to make their homes in the Appalachia Mountains - Virginia, Tennessee, Kentucky, and the Carolinas.

Much of the work there on the American frontier, including barn raising, molasses making, corn husking, and apple peeling, was done communally. At the end of the work day, people danced the old Scottish and Irish reels and jigs, with the music provided by a fiddle or fiddles. (See Southern Square Dance: A Brief History for more on dancing in Appalachia.)

Initially, fiddle tunes were played with no other instrumental accompaniment. Both black and white fiddlers played to accompany dances.

In the mid-19th century, the pairing of fiddle and banjo became common. The banjo developed in the Caribbean from African roots. In the United States, the instrument was played almost exclusively by African Americans until the 1830s when touring minstrel banjoists began popularizing it among whites. (See Banjo: A Brief History for more about the banjo.)

In the late 19th and early 20th century, other stringed instruments were added to the fiddle and banjo duos. These might include guitar, mandolin, harmonica, and either double bass or washtub bass. In the 1920s and 1930s, many string bands recorded fiddle tunes for record companies. These early recordings are common source material for contemporary fiddle players and string bands to learn tunes. The string bands are also the forerunners of the bluegrass bands that came about in the 1940s.

The Appalachian old-time fiddle repertoire began with reels and jigs that originated in the British Isles. Because tunes were generally played and passed on by ear, not printed music, variations of those tunes appeared. Sometimes the variations became so different from the original that they were essentially new tunes.

The terms reel and jig refer both to the type of dance and to the type of tune played to accompany the dance. Reels originated in Scotland and were introduced to Ireland in the late 18th century. Jigs, which are played in 6|8 time, are not very prominent in old-time Appalachian traditions today. The recording of "Swallowtail Jig" above is an example of a jig.

The reel "Soldier's Joy" is probably the most widely-known fiddle tune in North America. It most likely originated in Scotland in the 18th century.

Other European dance styles that became popular in the United States during the 19th century provided new tunes and additional fodder for original tunes. These included the quadrille, polka, schottische, two-step, and waltz. New types of fiddle tunes emerged in the United States, including breakdowns, blues, and rags.

A breakdown is a general term used primarily in the American South to refer to a wide range of up-tempo old-time and bluegrass tunes in duple 2|4 or quadruple 4|4 meter. They are often played for fast dancing, such as clogging and flat-footing. The playing style frequently includes the bowing of two adjacent strings simultaneously.

Carrying on the Traditions

Old-time Appalachian fiddle tunes reach far beyond Appalachia. The string band records of the 1920s and 1930s gained new life during the folk music revival of the 1950s and 1960s. A generation of young urban musicians became interested in fiddle tunes and other forms of old-time music and learned to play the instruments and tunes themselves.

Many revivalists and folklorists sought out the living masters in Appalachia. They learned the tunes and traditions directly from musicians like Tommy Jarrell, Henry Reed, and the Hammons Family. They also made invaluable recordings of these musicians that have served as source material for others to learn the tunes. These recordings are still available from sources like The American Folklife Center at the Library of Congress, Smithsonian Folkways Recordings, The Field Recorders' Collective, and Digital Library of Appalachia.