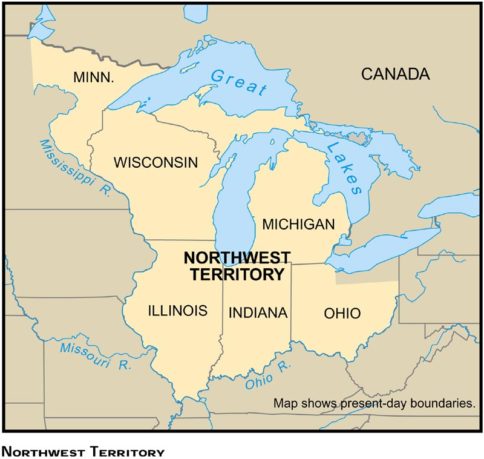 The desire for land has been part of the American psyche since the time of the early European explorers, conquistadors, and settlers. Throughout the 19th century, the quest for land pulled Americans ever farther towards the West. It also drove government policies and military actions that removed Native Americans from their lands.

While there was opportunity for American pioneers in the West, there was also a great deal of uncertainty. The decision whether or not to leave the relatively settled lands of the East was not an easy one to make. The lyrics to The Wisconsin Emigrant are representative of the discussions that went on in thousands of households as husband and wife debated whether or not to take their chances in the West.

Thomas Jefferson promoted the idea that the United States should be a nation of small, independent farmers. This would require a great deal of land to accommodate the growing population. Jefferson drafted the Land Ordinance of 1784, incorporating territories west of the Appalachian Mountains. In 1803, as President, he purchased approximately 828,000,000 square miles of territory from France, doubling the size of the United States.

Following the War of 1812, immigrants flooded into the United States to farm, work in factories, and build roads and canals. Because the soil in New England was poor and not ideal for farming, the region thrived on industries such as manufacturing, shipping, and foreign trade. Eastern seaboard land in the United States became scarce and expensive as industrialization advanced. For struggling New England farmers and factory workers, the lure of western lands for farming and independent living was strong. Many pioneers loaded their wagons and headed west.

The Northwest Territory, which existed legally from 1787-1803, consisted of all the land in the United States west of Pennsylvania and northwest of the Ohio River. This included the present-day states of Ohio, Michigan, Indiana, Illinois, Wisconsin, and the northeastern part of Minnesota.

The British Empire and France struggled for control of this region during the 18th century. During the Seven Years' War (1754-1763) the Native Americans living in the area generally fought alongside the French, with whom they had longstanding trade relations. Britain was victorious and took control of the land at the end of the war. The Great Lakes region became part of the United States in 1783 with the signing of the Treaty of Paris that ended the American Revolution, but that did not end the disputes.

For decades the British maintained a presence in the area and supported the Native Americans in their resistance against American expansion. Miami Chief Little Turtle led a confederation of tribes, including the Shawnee, Potawatomi, Odawa, and Chippewa, against the United States Army in the Northwest Indian War (1785-1795). The confederacy lost and were forced to cede extensive territory, including much of present-day Ohio. In 1810 Shawnee leader Tecumseh led an Indian confederacy against the U.S. Army. Tecumseh's War bled into the War of 1812, with Britain and the confederacy ultimately being defeated.

The end of the War of 1812 marked the end of British support for Indian resistance. The war also "renewed and reinstated the national feelings and character which the Revolution has given," according to Albert Gallatin, the U.S. Secretary of the Treasury. "They are more Americans; and they feel and act more as a nation." Americans turned to the federal government to cancel Native American titles to land in the Northwest and Indiana Territories. Official commissioners negotiated with remaining tribes for their lands and moved them farther west.

In 1827 the Winnebago tribe, reacting to a wave of lead miners trespassing on their lands in what is now the state of Wisconsin, attacked some American civilians. The so-called Winnebago Uprising consisted of only one or two incidents, but it alarmed American officials. After a show of U.S. military force, the Winnebagos ceded the lead mining region to the United States.

The Indian Removal Act, signed by President Andrew Jackson in 1830, authorized the president to grant unsettled lands west of the Mississippi River in exchange for Indian lands within existing state borders. Some tribes went peacefully. Others did not. Between 1830 and 1832 Sauk Chief Black Hawk led groups of Sauks, Meskawakis, and Kickapoos east across the Mississippi into the Illinois lands that were once theirs. Black Hawk believed that the treaties ceding Sauk lands had been signed without full tribal authorization. The U.S. Army drove the tribes back across the Mississippi River. Following the Black Hawk War, as this brief conflict is called, President Jackson ordered the relocation of all other tribes still living in the Northwest Territory to the Indian Territory across the Mississippi.

In 1931, 1941, and 1942 ballad collector Helen Hartness Flanders made recordings of "The Wisconsin Emigrant" from three different singers in New England. Between 1930 and 1958 Flanders, a native of Vermont, collected traditional songs and ballads throughout New England. Her collection of nearly 4,500 field recordings, transcriptions, and analyses are housed at the Flanders Ballad Collection at Middlebury College in Vermont.

Since times are so hard, I've thought, my true heart
Of leaving my oxen, my plough, and my cart
And away to Wisconsin, a journey we'd go
To double our fortune as other folks do
While here I must labor each day in the field
And the winter consumes all the summer doth yield

Oh husband, I've noticed with sorrowful heart
You've neglected your oxen, your plough, and your cart
Your sheep are disordered; at random they run
And your new Sunday suit is now every day on
Oh, stay on the farm and you'll suffer no loss
For the stone that keeps rolling will gather no moss

Oh wife, let's go; oh, don't let us wait
Oh, I long to be there; oh, I long to be great
While you some rich lady - and who knows but I
Some governor may be before that I die?
While here I must labor each day in the field
And the winter consumes all the summer doth yield

Oh husband, remember that land is to clear
Which will cost you the labor of many a year
Where horses, sheep, cattle, and hogs are to buy
And you'll scarcely get settled before you must die
Oh, stay on the farm and you'll suffer no loss
For the stone that keeps rolling will gather no moss

Oh wife, let's go; oh, don't let us stay
I will buy me a farm that is cleared by the way
Where horses, sheep, cattle, and hogs are not dear
And we'll feast on fat buffalo half of the year
While here I must labor each day in the field
And the winter consumes all the summer doth yield

Oh husband, remember that land of delight
Is surrounded by Indians who murder by night
Your house they will plunder and burn to the ground
While your wife and your children lie murdered around
Oh, stay on the farm, and you'll suffer no loss
For the stone that keeps rolling will gather no moss

Now wife, you've convinced me; I'll argue no more
I never had thought of your dying before
I love my dear children, although they are small
But you, my dear wife, are more precious than all
We'll stay on the farm, and suffer no loss
For the stone that keeps rolling will gather no moss

Matthew Sabatella and the Rambling String Band's version of "The Wisconsin Emigrant" is adapted from the printed lyrics, chords, and melody in The Ballad of America: The History of the United States in Song and Story by John Anthony Scott.