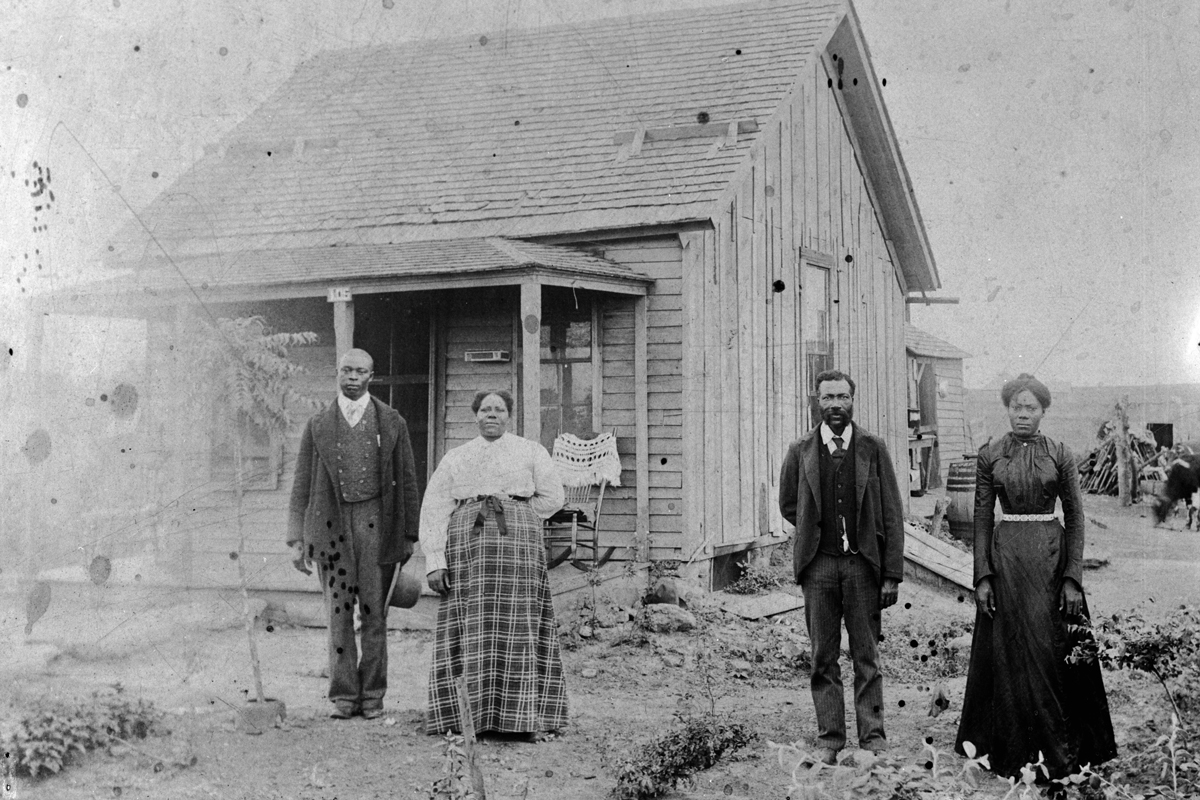 Ballad of America, Inc. acknowledges that numerous problematic historical issues are reflected by and embedded in the music and culture of the United States. "Home on the Range" is especially troublesome, as it extolls the virtues of land that the federal government seized from Indigenous people. The Indian Territory had been reserved for the forced resettlement of tribes from their ancestral homelands in the East. The government did not honor their promise that the land would be theirs in perpetuity.

The following verse from "Home on the Range" attempts to recognize this injustice, though it does so insufficiently and invokes an ethnic slur common at the time: "The red man was pressed from this part of the West. He's likely no more to return to the banks of Red River, where seldom, if ever, their flickering campfires burn." Though we deemed the song to be of sufficient historical and musical significance and value to include in our Sing It resources, we have chosen not to include the aforementioned verse due to the ethnic slur and cavalier tone.

"Home on the Range" stands as one of the best-known and loved songs of the American West. The lyrics originated as the poem "My Western Home" by Kansas homesteader Dr. Brewster M. Higley VI. Higley wrote the lines in the 1870s to celebrate the beauty of his surroundings on the Great Plains. His friend Daniel E. Kelley set the poem to music. John Lomax published the words and music together as "A Home on the Range" in his 1910 book Cowboy Songs and Other Frontier Ballads. Countless people have sung and recorded it in the years since. It is the official state song of Kansas.

Army explorer Stephen H. Long produced a map in 1823 that labeled the Great Plains as the Great American Desert. Chronicles of his 1820 expedition across the region established the persistent notion that the mostly treeless grasslands were unfit for farming and generally uninhabitable. Between 1841 and 1861, approximately 300,000 people traversed the Great Plains along the Oregon-California Trail to Oregon or the gold fields of California. Kansas was a gathering point for wagon trains heading west.

The Indian Removal Act of 1830 started a process of relocating Southeastern and Midwestern Native American tribes and nations to the plains. Despite guarantees that Indian Territory would be theirs forever, the federal government repeatedly broke treaties and forced the Indigenous Peoples onto smaller reservations. In 1854, the Kansas-Nebraska Act opened much of the lands to White settlement. Under this act, citizens of the two new territories were to determine the status of slavery within their borders. As White settlers from the free-soil North and pro-slavery South flooded into the territories to influence the vote, a series of violent confrontations ensued in a period that has come to be known as Bleeding Kansas.

Following the Civil War, railroads began to stretch into the plains. Kansas boasted several railhead towns, including Ellsworth, Wichita, Dodge City, Abilene, and Newton. Each spring from 1866 to 1885, Texas cowboys drove herds of longhorn cattle north to these railheads to be shipped to Chicago and the eastern markets. African Americans, Mexican Americans, Mexicans, and other immigrants found seasonal work as cowboys. Around the campfire at night, and sometimes on the job, they sang songs and ballads they carried from their places of origin. Many of the songs had roots in the British Isles. They also wrote new lyrics, tunes, and poetry to tell stories of their lives and work. Western newspapers published many cowboy poems and songs during the 1880s and 1890s. 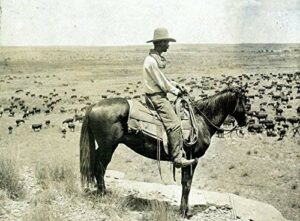 The long cattle drives came to an end in the mid-1880s as ranchers increasingly used barbed wire to fence off cattle. The Homestead Act of 1862 enticed hundreds of thousands of settlers to the Great Plains. The Act granted Americans 160-acre plots of land for only a small filing fee. Settlers migrated from the East to establish homes and farms. Though wind, insects, and scarcity of trees and water presented monumental challenges, many successfully plowed the land and put it into production.

In 1871 Dr. Brewster M. Higley VI, an otolaryngologist, acquired land under the Homestead Act and moved from Indiana to Smith County, Kansas. From his small cabin along West Beaver Creek, he wrote a poem celebrating his new home and surroundings. The Kirwin Chief published "My Western Home" on March 21, 1874. Several other newspapers published the poem during the 1870s and later, including The Smith County Pioneer and The Kansas Farmer.

Following is the poem as republished on The Kirwin Chief's front page on February 26, 1876. Note that Higley's words do not include the phrase "home on the range."

Oh! Give me a home where the buffalo roam
Where the deer and the antelope play
Where never is heard a discouraging word
And the sky is not clouded all day

A home! A home!
Where the deer and the antelope play
Where seldom is heard a discouraging word
And the sky is not clouded all day

Oh! Give me a land where the bright diamond sand
Throws its light from the glittering streams
Where glideth along the graceful white swan
Like the maid to her heavenly dreams

Oh! Give me a gale of the Solomon vale
Where the lifestreams with buoyancy flow
On the banks of the Beaver, where seldom if ever
Any poisonous herbage doth grow

How often at night, when the heavens were bright
With the light of the twinkling stars
Have I stood here amazed and asked as I gazed
If their glory exceed that of ours

Higley's friend Daniel E. Kelley, a Civil War veteran and semiprofessional musician, set the poem to music. Kelley was a fiddle player and founding member of the Harlan Orchestra, which frequently performed the waltz at dances. According to an attorney who investigated the origins of the song for a copyright lawsuit, "Home on the Range" was "well known to and generally sung by cowboys and other people traveling through that section of the country in stage coaches prior to 1890."

On a song collecting journey in 1908, budding folklorist John Avery Lomax learned it as "A Home on the Range" from an African American saloonkeeper in San Antonio, Texas. His informant told him that he heard it on the cattle drives of the 1880s. Growing up in the 1870s and 80s, Lomax was fascinated by the songs the cowboys sang as they made their way past his home along the Chisholm Trail. His Harvard University professors rekindled his interest in Western folk songs when he attended in 1906 at age 39. Lomax returned to the West with a postgraduate fellowship to collect American songs and ballads.

The result of his work was the 1910 book Cowboy Songs and Other Frontier Ballads, which included "A Home on the Range." The book brought authentic cowboy music to the attention of the general public. It also shifted folklorists' attention away from the ancient British ballads found and collected in the Appalachian Mountains toward indigenously American vernacular music. 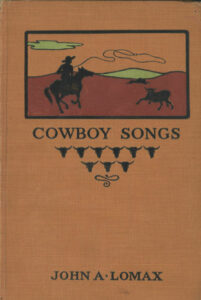 As one of more than one hundred songs in Lomax's book, "A Home on the Range" did not attract much attention. In 1925, San Antonio-based composer Oscar J. Fox published an arrangement of the song. Vernon Dalhart, whose million-selling hit "Wreck of the Old 97" kick-started the country music industry in 1924, made the first commercial recording of "Home on the Range" in 1927.

Though Dalhart's record did not sell particularly well, a handful of other artists recorded the song by the end of 1932, including Jules "The Singing Cowboy" Allen (1928), The Arkansas Woodchopper (1929), and Johnny Marvin (1932).

In 1932, Franklin Delano and Eleanor Roosevelt brought "Home on the Range" into the national spotlight. The Roosevelts embraced American folk songs as part of their efforts to focus attention on the rural Whites and minorities who were hit hardest by the Great Depression. Soon after his election, Roosevelt named "Home on the Range" as his favorite song. Subsequently, record companies raced to release new recordings.

Bing Crosby with Lennie Hayton and His Orchestra: "Home on the Range" (1933)

In 1934, the sudden popularity of "Home on the Range" prompted a legal dispute over the song's authorship. William and Mary Goodwin claimed that they wrote and copyrighted it in 1905. The Arizona songwriters were clients of Ralph Peer, record producer and founder of the Southern Music Publishing Company. Peer filed a $500,000 lawsuit against thirty-five defendants who had published or recorded what they believed to be a public domain song not under copyright protection. He contacted John Lomax, who stated that his informant claimed to have heard the song in the 1880s.

To confirm Lomax's statement, the Music Publishers Protective Association hired New York attorney Samuel Moanfeldt. On his three-month journey to uncover the song's origins, Moanfeldt traveled through Missouri, Colorado, Pennsylvania, and Kansas. In Dodge City, he collected statements from former cowboys, stagecoach drivers, buffalo hunters, and others who agreed that the song was well-known in the area before 1890. Moanfeldt also determined that Higley and Kelley had composed it in the 1870s.

From Cowboy Songs and Other Frontier Ballads (John Lomax)

chorus:
Home, home on the range
Where the deer and the antelope play
Where seldom is heard a discouraging word
And the skies are not cloudy all day

verses:
Oh, give me a home where the buffalo roam
Where the deer and the antelope play
Where seldom is heard a discouraging word
And the skies are not cloudy all day

Where the air is so pure, the zephyrs so free
The breezes so balmy and light
That I would not exchange my home on the range
For all of the cities so bright

Oh, I love these wild flowers in this dear land of ours
The curlew I love to hear scream
And I love the white rocks and the antelope flocks
That graze on the mountaintops green

Oh, give me a land where the bright diamond sand
Flows leisurely down the stream
Where the graceful white swan goes gliding along
Like a maid in a heavenly dream