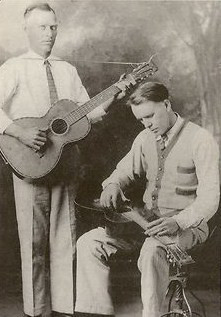 "Down in the Valley" is an American folk song in 3/4 waltz time. Folklorists John and Alan Lomax consider it a "jailhouse song" because they found it common in prisons, and many versions refer to a specific jail and a loved one on the outside. It is part of the English, Irish, and Scottish courting song traditions that persisted in the Appalachian and Ozark Mountains throughout the nineteenth century. The melody may be derived from J.C. Beckel's "The Happy Home Waltz," published in 1850. Alternately, "Down in the Valley" may be an older tune that inspired Beckel's composition.

In the first half of the twentieth century, "Down in the Valley" was printed in folk song collections from Missouri, Kentucky, Texas, North Carolina, and Virginia. More than twenty artists recorded it between 1927 and 1940, spreading its popularity nationwide. Printed and recorded versions exhibit variations in melody, lyrics, and title, which include "Birmingham Jail," "Bird in a Cage," "Twenty-One Years," "Down on the Levee," and "Little Willie's My Darlin'." Inclusion in countless church, camp, and school songbooks, as well as placement in movies and television, has rendered "Down in the Valley" one of the best-known American folk songs.

The roots of "Down in the Valley" lie in the Appalachian or Ozark Mountains. English, Scots-Irish, and German immigrants began settling in the Appalachians in the early eighteenth century. Some moved further west into the Ozarks. These settlers brought a wealth of traditional English and Scottish ballads into the mountains and sang them a cappella as part of daily life, including their courting rituals. These storytelling songs include Child ballads, which circulated orally in the British Isles during the seventeenth and eighteenth centuries, and broadside ballads initially disseminated on printed leaflets before entering oral tradition.

George Malcolm Laws, scholar of British and American folk song, considers "Down in the Valley" a "ballad-like piece," as it has some of the characteristics of the ballad but lacks the strong narrative that characterizes true ballads. These distinctly American songs and genres emerged as diverse musical influences came in contact with the old English and Scottish ballad-singing traditions. In Classic Country: Legends of Country Music, Charles K. Wolfe asserts that "Down in the Valley" has roots in both Black and White musical traditions. African American vocal styles, instruments, and melodic sensibilities had a significant influence on Anglo-American music. Popular blackface minstrel shows integrated Black and White musical elements and greatly influenced subsequent folk traditions. When the guitar became common in the southern mountains around the turn of the twentieth century, the simple chords taught in songbooks and instructional manuals tended to straighten out the melodic and rhythmic irregularities inherent in British ballad traditions.

American popular song also influenced the music created in the mountains. Irish poet Thomas Moore wrote lyrics to traditional Irish tunes and published a ten-songbook series, Irish Melodies, between 1808 and 1834. The nostalgia and sentimentality in the songs had a tremendous influence on American songwriters, including Stephen Foster, known by many as "the father of American music." In Best Loved American Folk Songs, the Lomaxes surmise about "Down in the Valley" that "the sugar and spice of popular song has come into the hills now."

The song is part of the courting song tradition, in which young men and women sing to win each other's hearts. Virtually any song can be used for courting when sung in the proper context. Songs like "Down in the Valley," however, seem expressly composed for this purpose.

The first version of "Down in the Valley" in the historical record was collected in 1909 or 1910 by Henry M. Belden, a folklorist with the Missouri Folk-Lore Society. Goldy M. Hamilton sent him the lyrics, which she learned from Frank Jones of West Plains High School in Missouri. American literary scholar George Lymon Kittredge included this version in the article "Ballads and Songs," which he edited for The Journal of American Folklore. The article, published in the July-September, 1917 issue, does not provide a melody. The lyrics as collected by Belden are as follows.

Down in the Valley

The guitar and vocal duo Darby and Tarlton made the first recorded version of "Down in the Valley" on November 10, 1927, in Atlanta, Georgia. Released by Columbia Records as "Birmingham Jail" with "Columbus Stockade Blues" on the other side, it was one of the best-selling records of the 1920s. Jimmy Tarlton played in a slide guitar style learned from African American musicians in North Carolina, South Carolina, and Georgia. Tom Darby stated that he wrote the song for his girlfriend Bessie, using the old melody for "Down in the Valley," in 1925, while serving time in the Birmingham jail for moonshining. However, most of the lyrics in Darby and Tarlton's recording match, or are variations of, the version collected by Belden more than a decade earlier.

Birmingham Jail
(as recorded by Darby and Tarlton in 1927)

Down in the meadow, down on my knees
Praying to heaven, give my heart ease
Lighting a candle, singin' so low
Kiss me once more, love, that I might go

Leadbelly: “Down in the Valley”

"Down in the Valley" is found in regional folk song collections, including Ballads of the Kentucky Highlands, Texas Folk Songs, and Folk Songs from North Carolina, indicating that it circulated orally, as well as through commercial recordings. Many popular songbooks used for singalongs at camps and other gatherings have also included versions of the song. It appears in Carl Sandburg's The American Songbag (1927), B.A. Botkin's A Treasury of American Folklore (1944), and Peter Blood and Annie Patterson's Rise Up Singing: The Group Singing Songbook (1988), among many other collections. Some versions feature a descending melody on the opening phrase. The ascending notes in the Sing it Yourself recording on this page are much more common.

Down in the Valley
(adapted from John and Alan Lomax's Best Loved American Folk Songs, 1947)

Botkin, B. A. A Treasury of American Folklore: Stories, Ballads, and Traditions of the People. New York, NY: Crown Publishers, 1944.