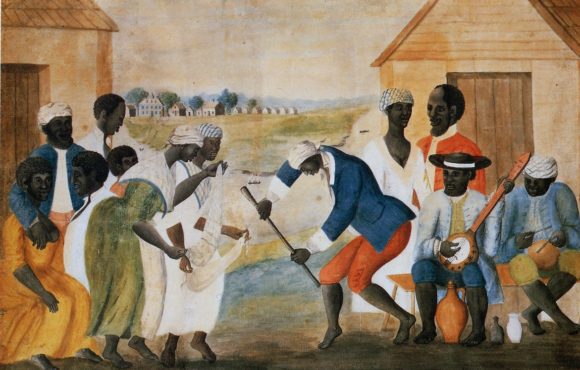 This is the third of four articles that mine the latest scholarship on banjo history from the book Banjo Roots and Branches (University of Illinois Press, 2018). The first part explored the African roots of the banjo. The second part discussed developments that took place in the Caribbean in the context of the transatlantic slave trade. This article examines and contextualizes the earliest references to the banjo on the North American continent.

The banjo in 18th century North America was an instrument of African American culture, but the fiddle was far more commonly-played by black musicians. There are a total of eighty-five documented banjo sightings between 1736 and 1840. All but four of these were in reference to African American musicians. Unlike the fiddle, the banjo was primarily a southern instrument. More than half of the banjo sightings were in the Chesapeake Bay states of Virginia, Maryland, and Delaware. The rest were widely scattered with small clumps around New York City and New Orleans.

The earliest known reference to a banjo in North America comes from a letter published on March 7, 1736 in John Peter Zenger’s The New York Weekly Journal: Containing the freshest Advices, Foreign, and Domestick. The letter is attributed to someone identified only as “The SPY.” The SPY’s letter describes a fair that took place in “the Field, little Way out a Town.” Historians have determined that this location was likely “the Common” of early New York City. The Common was an open civic space used as a common grazing land and for public gatherings. Previous historians believed that The SPY’s account of an African American fair that took place in lower Manhattan described a Pinkster frolic. In Banjo Roots and Branches, banjo historian Greg Adams finds evidence to suggest that the celebration described is actually a Paas (Easter) Monday fair, and he determines that April 10, 1730 is the likely date of the event.

The SPY mentions the “banger” being played three times throughout the letter. There is no description of the banger, so it may be assumed that the instrument was sufficiently well-known as to not warrant further explanation. The SPY account also references dancing while drums and percussion instruments are played.

The Plain partly covered with Booths, and well crouded with Whites, the Negroes divided into Companies, I suppose according to their different Nations, some dancing to the hollow Sound of a Drum, made of the Trunk of a hollow Tree, othersome to the grating rattling Noise of Pebles or Shells in a small Basket, others plied the Banger, and some knew how to joyn the Voice (to) it.

African-style drums and rattles similar those described were widely reported throughout the Caribbean. The 1737 census shows that “Negroes” made up approximately 20% of the population of New York City. They were almost all enslaved. Most had been acclimated to slavery, the English language, and Afro-Creole culture (“seasoned”) in the Caribbean where the early gourd banjo took shape. Runaway slave advertisements corroborate the fact that the early gourd banjo could be found in the New York metropolitan area during the 18th century.

The Depiction of the African American Early Gourd Banjo in The Old Plantation, South Carolina, 1780s

The painting The Old Plantation (see photo at the top of this post) provides the earliest depiction of a banjo in North America. It was painted by slave-holding planter John Rose in South Carolina’s Low Country during the 1780s.  The painting is a richly-detailed portrayal of African American music and dance in the 18th century. In Banjo Roots and Branches, Shlomo Pestcoe examines various features of the banjo pictured, determining which of these features are shared with other early gourd banjos, West African predecessors, and later European-American built minstrel banjos. He also shows the West African precedents and influence of the depicted dance.

The Old Plantation banjo includes features that define it as an early gourd banjo and differentiate it from known instruments in West Africa including a flat, fretless fingerboard and wooden tuning pegs. It is a  4-string full spike lute, meaning the neck passes over or through the entire body of the instrument. Features that it shares with West African spike lutes include decorative sound holes in the body and a short thumb string which provides a musical drone – a defining feature of banjos to this day.

The following table summarizes the physical features of various early gourd banjos. It indicates whether or not each feature was present on:

The dance depicted in The Old Plantation is reminiscent of communal social dances throughout West Africa. The ring formation is a feature of social dances found throughout the African diaspora. The male dancer holds a stick or wooden staff, which is a common prop in some West African dance traditions. Pestcoe suggests that the stick might indicate a connection to stickfighting. Stickfighting was a martial art in the Caribbean in the 18th century, and it was also documented in The SPY’s 1736 letter to The New York Weekly Journal.

Historian/writer Kristina Gaddy and researcher/banjo builder Pete Ross (a contributor to the book Banjo Roots and Branches) have done more recent research into the meaning of the dance depicted in The Old Plantation. The scene in The Old Plantation is almost identical to the Slavendons papier-mache dioramas created by Gerrit Schouten between 1810 and 1839 depicting scenes in Suriname. The people in the dioramas are participating in a role-playing religious ceremony that includes a dance known as the banya prei. The key elements of the King, the Queen, the hut, the vessel, dancing, singing, and the banjo are found in The Old Plantation, the Slavendons, and historical documents describing other ceremonies witnessed in the Americas and the Caribbean. In some historical records, “playing banya” or “playing banjo” may have referred to the dance ritual, not the musical instrument.

The video below shows me playing “Pompey Ran Away” on a banjo built by Pete Ross. The banjo is patterned after detail from The Old Plantation. “Pompey Ran Away” appears in the book A Selection of Scotch, English, Irish and Foreign Airs, published by James Aird in 1782. The book indicates that the tune is a “Negroe Jig,” [sic] but Aird’s source for the tune not known.

Runaway slave advertisements included details about the missing individuals that might have helped people identify them. Often this included mention of musical instruments that they played. Robert B. Winans, editor of the Banjo Roots and Branches book, read more than 12,000 runaway slave advertisements from 20,000 issues of 300 newspapers from the 18th century. He found references to a total of 761 black musicians. In Banjo Roots and Branches Winans organizes the data into tables and analyzes it.

Perhaps most strikingly is the overwhelming majority of musicians who played the violin or fiddle. A total of 627 of the 761 musicians (88.4%) played the instrument. Approximately 66% of the advertisements referred to the instrument as a fiddle and 33% as a violin. The remaining instruments mentioned, in descending order of popularity, are fife (50), drum (21), flute (18), banjo (18), French horn (8), pipes (3), and guitar (1).

All of the instrumentalists described in the advertisements were adult males. Some women and men were identified as singers, but Winans’ study focused only on musicians who played instruments. Curiously, the data shows that the ratio of musicians to the total number of adult male runaways was highest in the North (1:10 in New England) and decreased steadily moving towards the South (1:63 in the Deep South). The majority of the musicians were house servants or craftsmen, with occupations that included carpenter, cobbler, wheelwright, distiller, weaver, boatman, and butcher. Some were identified as farmers.

A few of the fiddlers made money playing music. Dan from Lancaster, Pennsylvania, is described as “fond of playing the fiddle, and has a good deal of money with him which he acquired that way.” Evidence indicates that these musicians made money playing for tips on the streets, at dances, and in brothels. Others made money by teaching people how to play the instrument or providing music for dancing masters who gave dance instructions.

Approximately 83% of the banjo players were from the South, with 66% from Maryland or Virginia. The three players from the North were from New York City, New York; Hanover, Pennsylvania; and Elizabeth, New Jersey. Among the eighteen references to black musicians who played the banjo, there were eight different spellings of the instrument: bonja, banjo, banger, bangeo, banjoe, bongo, banjeau, and banjeo.

Winans concludes that the banjo was probably not widely played in 18th century North America. There were approximately thirty-six fiddlers for every banjo player advertised. Data collected in the 1840s through 1860s show that by this time the banjo was much more common among black musicians, with half as many banjo players as fiddlers.

Part 4 of this 4-part series considers various aspects of white and black banjo playing in 19th and 20th century America.